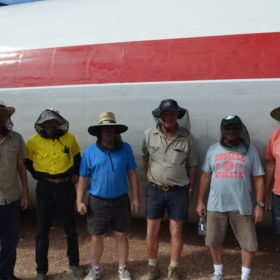 The last fortnight has been very busy for the Super Constellation Project with the aircraft now standing on its own ‘legs’ (landing gear) for the first time in over 3 years and the aircraft’s wings and engines now attached! This is all the more significant when you consider it has been just over a year since the aircraft was transport by ship to Townsville from Manila, Philippines and by truck from Townsville to Longreach.

Assisted by a team of six committed Qantas Sheet Metal workers, the Project Manager and a small team of volunteers worked through late January to March preparing the aircraft structure and completing the first of over 200 necessary repairs.

By April 2018, the team from Quick Strip Dustless Blasting Services, who had been concurrently stripping off more than 60 years’ of paint and applying the Qantas livery to the aircraft, left (temporarily) and have been replaced by a constant stream of volunteers. These volunteers have been continuing the work on repairing and replacing damaged or corroded areas of the aircraft as well as preparing the aircraft for the attachment of its wings, landing gear and engines. This work has been completed in some trying conditions including 40 degree days and flies that just won’t leave you alone! Fortunately the weather is cooling off and the flies are gone.

On Tuesday 8 May, the PJ Rayner cranes arrived on site to lift the Super Constellation fuselage onto stands for the wing attachments. On Thursday 10 May, the project team started the slow and careful process of attaching the wings with modified transport frames, starting with the right or starboard wing. While at times laboured, the team was able to attach the wing by early afternoon and decided to tackle the port or left wing the next day. With the experience of the first wing, the second wing was attached by late morning on 11 May providing great relief for all.

On Monday 21 May, two cranes arrived to again lift the Super Constellation fuselage to allow the landing gears to be fitted. It had been over 3 years since the aircraft was disassembled and the team was looking forward to the aircraft standing on its own feet again. In an afternoon the team was able to attach the nose and main landing gears. Thank you to the team from PJ Rayner Crane Hire who not only operated the cranes but enthusiastically stepped in to help our volunteers. Finally the fuselage was lowered and the aircraft was standing on its own. A big day for the project. With no hydraulic or air pressure the aircraft stands about a foot lower than it normally would.

There was no rest for the weary as the next day on Tuesday 22 May, the team started to attach the engines/propellers. They had high hopes of attaching all four engines in one day but the aircraft decided to test our patience. At the end of the day after nearly four hours of work, engines 1 and 2 were finally on the port wing.

Work began early on Wednesday 23 May, to attach engines 3 and 4. Engine 4 went on in three hours but there was concern about engine number 3 as there had been some damage to the engine from a suspected hard landing in its previous life. As fate would have it, this engine went better than expected but there was still a bit of work to be done. Our Super Constellation obviously has a sense of humour. The rest of the week was being spent working on the engines, attaching the engine cowling and preparing for the attachment of the tailplane before the end of June.

June will see the return of the Quick Strip Dustless Blasting Services team to complete final paint touch ups to the aircraft and paint on all the insignia to complete the external restoration of the aircraft by 30 June 2018.

The next stage of the project will be the internal restoration and display creation which the Qantas Founders Museum hopes to be completed by the Qantas Centenary year of 2020.

This project is jointly funded by the Qantas Foundation Memorial Ltd and the Australian Government, administered by the Queensland Government.