The Australian Transport Safety Bureau (ATSB) yesterday released a statistical report that shows fatalities in general aviation are in decline.

Covering the years 2010-2019, the report states that although GA accidents increased slightly, the fatality rate decreased over the study period.

"Between 2010 and 2019, over 90% of accidents and fatal accidents, and around 80% of serious incidents, involved aircraft operating within the general aviation and recreational aviation sectors," the report notes.

Overall, the ATSB found there was a decrease in the number of fatal accidents of around one fatal accident or 1.4 fewer fatalities per year.

The 2019 statistics recently finalised revealed 17 fatalities in GA for the year, almost level with recreational aviation on 18 fatalities.

Statistics taken from the ATSB's occurrence database for the 2010-2019 period show that accidents–fatal or otherwise–have been on a slight upward trend since 2010, with numbers increasing for all of the major operational sectors except  sport aviation.

Training and air work accidents are also on the rise and private aviation also shows an upward trend over the ten years. However, private aviation has shown a marked improvement in the accident rates since a spike of 124 in 2014. For the period 2013-15, there were an average of 98 accidents in private aviation every year. The average for 2015-18 is 80 accidents, a decrease of 18%.

The star performer is the sport aviation sector, which started the study period with a 2010-12 average of 35 accidents per year. That is now down to only three accidents on average for 2016-18, a decrease of 91%. However, there were 11 accidents in sport aviation in 2019, the sector's worst showing since 2015, when 16 accidents were recorded.

Accidents in business aviation over the ten-year period continue to be so small as to be insignificant. 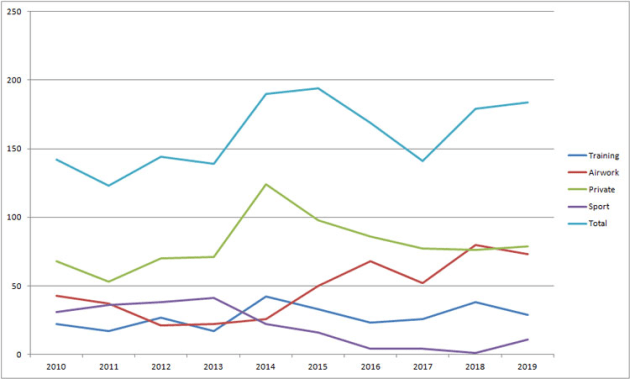 The full statistical report is on the ATSB website.